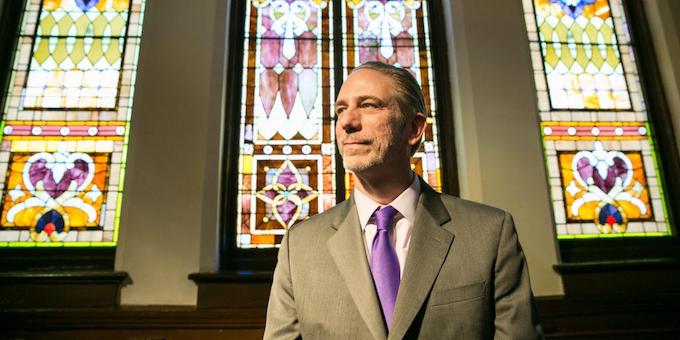 You and I have a lot in common.

Those were the first words I shared with Dr. David Gushee when I met him at his office at Mercer University to help finalize Front Edge Publishing’s plan to produce his most important book: Changing Our Mind.

Five years later, the book has become a Front Edge best seller—and has helped thousands of families around the world to accept their LGBT loved ones. Now, I understand why those first eight words I said to Dr. Gushee were a perfect introduction.

As Dr. Gushee explains in this interview with our Editor David Crumm, the whole point of this book is helping parents to love their children.

In the opening pages of Changing Our Mind, he further explains this urgent need for  a message of Christian compassion, especially among younger men and women who are torn by traditional evangelical condemnation of their loved ones.

The young people in our congregations don’t have the luxury of avoiding the challenging questions this issue raises. Our best friends from church tearfully tell us they are gay and have anguished over that fact for years. Our peers at school come out and don’t feel safe to set foot in a church again. For Millennial Christians, this issue isn’t an abstract political football. It’s a question of how much space and grace we will make for friends we dearly love, and friends whose differences have made them feel incredibly alone, afraid and unloved.

In other words: This book is all about recognizing what we have in common.

In that first meeting, all Dr. Gushee knew about me was that I was a Northern transplant. His Southern roots are obvious in his resonant drawl.

As we sat down in his office, I ticked off a list of connections. One of my daughters had been a student in one of his theology classes at the Mercer-Macon campus and had fortunately made a good impression on the professor. Dr. Gushee and I are the same age; we both married right out of college; he and his wife Jeanie have been married the same number of years as myself and my husband.

As I listed all of those connections, I remember the surprise that spread across his face.

The story I just shared with you is the key to marketing our best seller: This book compassionately connects lives. Reading Dr. Gushee’s story of moving toward inclusion, thousands of readers have seen themselves in his experiences.

One reason Dr. Gushee chose to work with our publishing house was the practical need to rapidly produce such a very timely book, then to begin revising that new book almost immediately—as our Director of Production Dmitri Barvinok explains in his column. Beyond that pragmatic value of our special speed and flexibility as publishers is the much deeper relationship we have fostered as we have worked together over the last five years.

At the heart of that relationship is our understanding that publishing is connection.

Our Front Edge specialty is building communities around books. Our expertise, as publishers, is finding allies and angels that expand these communities of readers until they circle the globe. That’s certainly true of Changing Our Mind.

Changing Our Mind—Building the Community around the Book

My initial visit with Dr. Gushee went well and I returned to my office excited to help bring the news of this very important book to the world. I immediately started preparing a media list of LGBTQ allies. Some were obvious like The Reformation Project organizer and LGBT activist Matthew Vines. Matthew had written the Introduction to the book, so we knew we could count on him for support.

Then, connections began to flow in many directions. Matthew reached out to Jonathan Merritt, who was a senior columnist for the Religion News Service (RNS) at that time. Jonathan immediately zeroed in on the news value of a major talk Dr. Gushee was going to deliver on November 8, 2014, at a Reformation Project conference in Washington D.C.

That talk would make national news, Jonathan knew. As a journalist for RNS, Jonathan was given access for an exclusive pre-conference interview with Dr. Gushee and his article was scheduled to run November 6, the day the conference opened and two days before Dr. Gushee’s talk.

However, news about Dr. Gushee’s change of heart—and his upcoming D.C. talk—broke early among journalists covering religion, so the decision was made to push up the RNS article and it was published instead on October 24, two weeks before the D.C. conference. Jonathan’s story was picked up by many news sources, including the Washington Post. One online news report about his new book racked up 42,000 mentions on Facebook by readers who understood the significance of this new stance by Dr. Gushee.

Changing Our Mind—Allies Rallying and A Media Firestorm

Because Dr. Gushee was making a groundbreaking decision to part with his traditional evangelical stance on the LGBTQ issue, we were not sure what kind of press we were going to get from many of the traditional media outlets. I issued a Changing Our Mind press release on October 27, which included the news about how favorably the RNS article was being received around the world. Sojourners magazine also planned to report its own story.

I managed our end of the outreach as carefully as I could to encourage fair and balanced coverage of the book and Dr. Gushee himself. I reached out separately to over 60 media sources with an email that included the press release and a PDF of the book, plus a link to additional press resources that we made available online.

However, given the controversy over America’s leading evangelical ethicist reversing course so dramatically, negative press was inevitable. That included columns by traditionalist writers who clearly had not read the book or talked to Dr. Gushee—but were furious that their former ally now was calling them to change course with him. These critics began pumping out angry responses via websites, traditionalist magazines and social media.

A firestorm erupted in my email inbox!

Changing Our Mind—Circling the Globe

Readers have ordered copies of Changing Our Mind from Amazon and other online retailers from locations on all of the inhabited continents. So far, we’re not aware of an order from the research centers on Antarctica, but who knows? Someone may have packed a copy in their gear for a stint at the South Pole.

We do know that a big box of these books was shipped to New Zealand, purchased by the Rev. Susan Jones, a Presbyterian minister in Wellington who hoped that the book might change the minds of some reluctant delegates to that country’s nationwide Presbyterian assembly.

Among our specialties in fast-and-flexible publishing is customizing group orders. We can add a group or event logo to the book’s cover and add pages to the book with information about that group or event. (Here’s more about customization.) One angel, who ordered a customized version of Dr. Gushee’s book, distributed those books at the March 2015 California conference called: A Stirring—Conversations about Loving and Including Gay Christians in our Congregations.

That event extended the book’s connections even further around the world. One of the organizers of A Stirring was an evangelical Chinese-American pastor who wanted to carry Dr. Gushee’s important message to Chinese-speaking Christians. After the California conference was held, this new ally asked our publishing house to help him organize a team to produce a Mandarin-Chinese translation of Changing Our Mind. Dr. Gushee supported that idea and a new Chinese Edition will be released in 2020.

Changing Our Mind continues to be a central part of my own ongoing planning for outreach in the new year.

It’s been a huge honor to share the news of this book and, now, the new and upcoming editions with the world.

Of course, it’s my business to sell books. But this work is far larger than that practical goal. It’s a vocational mission to grow compassionate communities around the many books we publish.

I look forward to a future where more and more minds are changed.