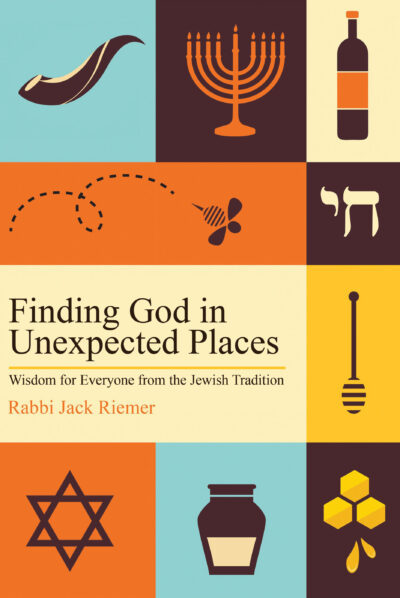 A word of warning: The stories in this book may surprise you and perhaps make you chuckle, but they could change your life, as well.

Finding God in Unexpected Places: Wisdom for Everyone from the Jewish Tradition, is a compilation of distinguished sermons by the gifted storyteller, Rabbi Jack Riemer.

Rabbi Riemer offers us the kind of wisdom that we need in order to survive and thrive, writes Dr. Bernie Siegel, best-selling author of a dozen books about spirituality and healing. The late Nobel laureate Elie Wiesel adds, Jack Riemer’s words are songs of hope and faith. Listen to them as I do.

Widely sought after as a master storyteller and teacher, Riemer is one of the most frequently quoted rabbis in the U.S. That’s because of the winding paths he takes in describing the relevance of timeless Jewish wisdom in our modern world.

What do a professional baseball player, Elizabeth Taylor’s jewelry box, a hurricane, a garbage dump and a blue blazer hanging in your closet have to do with each other? They’re all turning points in Riemer’s stories that lead us toward universal questions we all confront at some point in life, including: Is there a dream that gives meaning to your life? What are our duties to the people we love? How do you make a decision when you’re caught between two conflicting values? And, what would you do if you found out that your time on this earth was almost up?

Reflecting on Riemer’s wisdom about life, retired U.S. Supreme Court Justice Sandra Day O’Connor writes that the rabbi is obviously a person with much understanding of the human situation.

Rabbi Jack Riemer is best known as a rabbi’s rabbi, because of the way he shares his many talents with colleagues. Rabbi Riemer’s teaching is so influential that former President Bill Clinton read one of his texts during a televised National Prayer Breakfast. For many decades, the rabbi has served the Jewish community nationwide, including congregations in California and Florida. He is in demand to speak and lead seminars on preaching as well as teaching about his specialty: fostering a spiritual legacy through ethical wills. He founded the National Rabbinic Network, a support system for rabbis across all denominational lines. The author of several popular books, Riemer now adds this devotional volume collecting some of his most-requested messages marking Jewish holidays. The stories were chosen for their wit and wisdom that is sure to touch readers from all religious backgrounds.