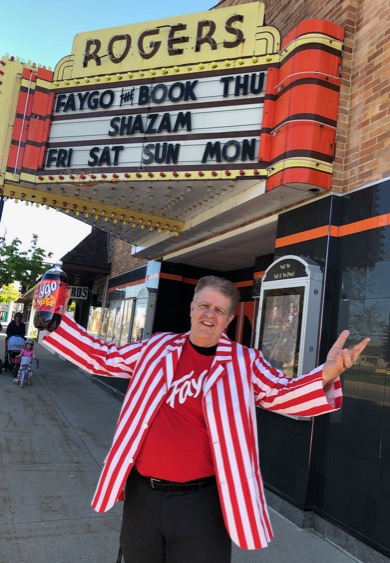 The book I am currently promoting is The Faygo Book, the story of a beloved soda pop company that has been bottling in Detroit since 1907. It has limited reach outside Michigan, where it is treasured and celebrated and has a nostalgic appeal among Baby Boomers.

Those qualities made it possible to get these first 100 bookings. They are also the reasons why all the bookings were in Michigan, which helped me to physically reach to so many places. I gave more than 100 talks in the first year the book was out, even with two months off while I did other projects.

My publisher for this book, Wayne State University Press, is like many in that it weighs the willingness of authors to hustle books when it decides which ones to publish. I said I would give talks, but exceeded even my own expectations. The talk has evolved far from the first ones I gave, based on how audiences received it. Listeners made the talk better. Local librarians made it go viral.

Faygo bottles a rainbow of more than 50 flavors. From the 1907 originals of grape, strawberry and fruit punch, the company has grown to include black cherry, pineapple, orange, cotton candy, candy apple and my BFF (Best Faygo Flavor): rock & rye.

Faygo’s colorful, carbonated nature meant that the program had to be fun and interactive. It lent itself to videos of vintage commercials, pop quizzes and a trove of photos old and new.

With those natural advantages in mind—

Here are 11 lessons for selling your book

Before expenses, mostly for my poor car, my programs have brought in about $15,000. They have given new life to some of my earlier books as libraries ask me what other programs I can deliver. I am working up a program on a book I published several years ago that did not sell well, but that I think could be good for programming. We shall see.

The talks have helped sales. We went to press in October 2018 with a press run of 2,000 books. By December, we had to do an emergency run of about 150 copies to get through the holidays. We came back in January with a larger run. I do not know how many times we have gone to press by now, but the publisher sold about 3,000 books in 10 months. I bought more than 400 of them. You need some to give some away, and it helps to pass a display copy among the audience, so some get damaged or lost.

Check out our latest coverage of Joe Grimm’s ongoing Bias Busters series with the Michigan State University School of Journalism: