If we spend this much time on every chapter, we’ll never finish this book! That’s what Victor Begg told me one morning in the spring of 2018 as we had just spent several weeks in a back-and-forth email dialogue about the opening chapter of his 2019 book, Our Muslim Neighbors.

Victor, veteran writers and editors expect to spend about as much time on the opening and the closing of a project than they do on all the rest of the work, I told him. After more than four decades as a journalist, that assumption is baked into my bones. I hadn’t stopped to consider that I should explain the importance of this focus on the opening and closing to first-time authors.

So, let me explain …

Masters Taught Us the Importance of an Opening Line

We could start thousands of years ago with the ancient Jewish oral tradition that began the world’s greatest story with, In the beginning … Come on! You can finish the line, right? 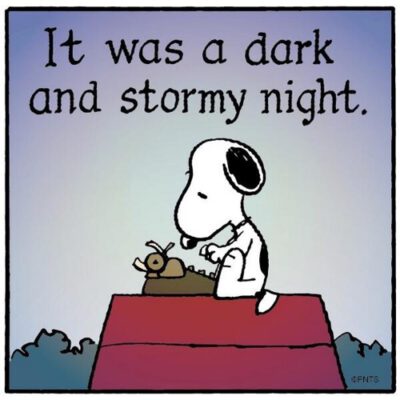 Then, two centuries ago as popular novels began to sweep around the world like hit songs do today, Edward Bulwer-Lytton (who at one point was as popular as Charles Dickens) penned the immortal opening line: It was a dark and stormy night … Of course, by the mid 20th century, that line was lampooned as an over-the-top example of florid writing. Even Snoopy got a laugh by hammering out that line on his manual typewriter in Peanuts.

Back in Bulwer-Lytton’s and Dickens’ day, great writers moved easily between journalism and novels. Dickens himself was a hugely popular journalist. So, by the pinnacle of American newspapers in the late 20th century, senior reporters routinely spent as much time crafting the lede (newsroom jargon for lead paragraph) and the kicker (the end of a story) as they did writing everything else.

In that era, I was often called on to serve as Rewrite, the reporter at the newsroom’s main desk during a big breaking story in which other reporters phoned in their bits and pieces from the scene. Any good Rewrite knew that the trick was to craft the most compelling lede and the most memorable kicker as soon as possible. Then, the rest of the challenge, as the phones rang with fresh details, became a matter of organizing, in between the lede and kicker, the rest of the bits and pieces in the most logical order.

From the Pulpit: Great Preachers Inspired Us with This Truth

Remember the opening line from the Bible I mentioned earlier? Great religious leaders have known this truth since ancient times—even if many preachers forget this vital lesson.

The biggest mistake preachers make is wasting the most focused moments of a congregation’s attention by simply clearing their throats, the great historian and religious commentator Martin Marty told me over lunch one day as we were working on a newspaper project together. Of course, Marty is famous for his terse way of cutting to the core of any message. He told me that he always steps into a pulpit ready to open with his best line.

That also was the message of perhaps the greatest 20th century master of preaching, judged by how influential his style was to thousands of other pastors nationwide. The Rev. C.L. Franklin was Aretha’s father. By the early 1950s, records of his remarkable, chanted sermons (affectionately called whooping) were in African-American churches and homes coast to coast. His single most influential sermon was known as The Eagle Stirreth Her Nest, and in 2011 the Library of Congress (LoC) added the Chess-label 1953 recording of that sermon to its National Recording Registry. Along with the recording they added this fascinating essay by Nick Salvatore, explaining the mastery of Franklin’s achievement.

Most commentaries on Franklin’s preaching focus on the very end of his sermons—the most emotionally charged portion of his whooping. In fact, many audio samples of that famous sermon cut out the opening! However, Salvatore points out that Franklin’s mastery began with his choice of a half-sung, half-chanted version of the gospel song Father I Stretch My Hand to Thee. Unfortunately, the LoC does not currently provide the 1953 audio. Here is a YouTube link to the sermon’s opening, posted by Walter Robinson. The YouTube is a little clunky to navigate, but Robinson did add parts 2, and 3, and the ending as well. The version Robinson posted was nearly 40 minutes! Once Franklin had a congregation’s attention—he never let go!

From The Moth to TED: This Timeless Wisdom Rings True

Well, after C.L. Franklin—the rest of our story about the importance of opening lines is simply a matter of connecting the dots as media evolved.

In the 1990s, New York City storytellers created The Moth. One of The Moth’s most important tips for storytellers, posted on The Moth’s main website, is: Have a great first line that sets up the stakes and grabs attention.

TED conferences had started back in the 1980s, but the phenomenal popularity of TED Talks was really fueled by the 2006 decision to post free TED Talks online. Now there are thousands of these official TED Talks floating around the Internet. In TED’s own online tips for speakers, the staff actually practices what it preaches by expressing their advice about a great opening line in just 3 words: Distill your idea.

We Practice What We Preach—And Publish Great Preaching, Too

Because our Front Edge Publishing house team is well aware of these compelling principles, we’ve always been interested in publishing great preachers.

Just to highlight a few of our most popular examples: Readers love books by Rabbi Jack Riemer (who is known as the dean of Jewish preaching for his years of teaching the art of preaching to young rabbis), Rabbi Bob Alper (who still preaches to congregations, but is famous as a full-time standup comic), the Rev. Faith Fowler (whose best-selling memoir This Far by Faith is drawn from years of preaching), the Rev. Daniel Buttry (who has circled the world as a global peace trainer), and the Rev. Dr. David Gushee (whose book Changing Our Mind has helped families around the world).

These five know the importance of a great opening line!

We also publish talented journalists and …

But, stay tuned! That’s the start of a column for another week.

So, What Happened with Victor Begg?

After many weeks of work, here is the opening we finally crafted for Victor’s book, Our Muslim Neighbors:

I am an accidental activist.

I arrived in America at Kennedy Airport in 1970 as a student en route to the University of Detroit Mercy—barely noticing the Twin Towers rising against Manhattan’s skyline. The North Tower wouldn’t be completed until that December, the South Tower took another year. The American Dream was calling me as it had called milllions of immigrants before me.

Why is that such a well-crafted opening? Since his book was published early in 2019, I have given talks about this opening passage. Without going into too much detail, I can share a few highlights:

Then, Victor and I worked nearly as long on his closing chapter, which is so compelling that he often reads that final chapter aloud at public appearances, now. But, I will save that story for another column, I’ll call The Art of the Kicker.

Stay tuned to our Front Edge Publishing columns … Scroll down further on this page and you can subscribe to a free, weekly email reminder of new columns.

And, by the way, Victor Begg’s book has just been released in audio via Amazon-Audible, so you now can hear his voice telling his story.