Let’s start by busting a myth we hear frequently about publishing, often voiced like this: Aren’t books dying? Young people don’t read books anymore, do they? 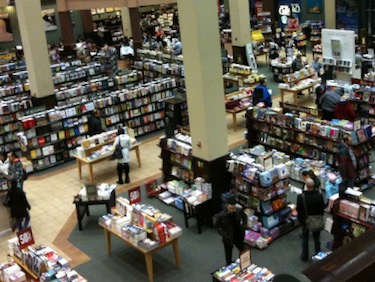 About three-quarters (74%) of Americans have read a book in the past 12 months in any format, a figure that has remained largely unchanged since 2012 … Print books remain the most popular format for reading. … Overall, Americans read an average (mean) of 12 books per year, while the typical (median) American has read four books in the past 12 months.

Finally, here’s a real shocker from Pew researchers: Younger adults (ages 18-29) are more likely to read books than those 65 and older.

So, How Do We Reach Younger Readers?

Here’s another truth that may surprise you: Among teens today—those kids who soon will be book-buying adults in that valuable 18-29 age range—the main social media artery is not Facebook.

Just a few years ago, it was.

Here at Front Edge Publishing, our overall advice to readers and writers (in columns like this) has been that Facebook dominates the social media world. And, when we say that, we mean Facebook dominates by a wide margin. If we consider all adults, that remains true.

On May 31, Pew Research published a report called Teens, Social Media & Technology 2018, which you can download as a 19-page PDF at Pew’s website.

To save time, here’s the heart of the matter from Pew:

Until recently, Facebook had dominated the social media landscape among America’s youth–but it is no longer the most popular online platform among teens. … Today, roughly half (51%) of U.S. teens ages 13-17 say they use Facebook, notably lower than the shares who use YouTube, Instagram or Snapchat. … The social media landscape in which teens reside looks markedly different than it did as recently as three years ago. In the Pew Center’s 2014–2015 survey of teen social media use, 71% of teens reported being Facebook users. No other platform was used by a clear majority of teens at the time. … In 2018, three online platforms other than Facebook–YouTube, Instagram and Snapchat–are used by sizable majorities of this age group. Meanwhile, 51% of teens now say they use Facebook.

Why Does This Matter?

Why should we care about where our kids spend their time?

Because Pew also found that, if we hope to grab the attention of this emerging generation, we have to connect via social media. That’s based on perhaps the least surprising finding in this new Pew report: Young people are almost constantly tethered to their digital devices.

As smartphone access has become more prevalent, a growing share of teens now report using the internet on a near-constant basis. Some 45% of teens say they use the internet almost constantly, a figure that has nearly doubled from the 24% who said this in the 2014–2015 survey.

This week, our team at Front Edge Publishing suggests: Take a look at this new Pew report. Social media patterns are changing at a remarkable rate, starting with our teens right now.

But how do we reach them with new releases?

The takeaway today: Stay nimble in your social media!